According to a FIFA statement, the Malagasy, who has been under investigation, has been charged for breaching 4 acts of the FIFA code of conduct.

Ahmad Ahmad had been under investigation by FIFA Ethics Committee between 2017 and 2019, into irregularities concerning CAF- related governance issues.

According to a FIFA statement, the Malagasy has been charged for among many governance issues using CAF money to finance an Umrah pilgrimage to Mecca for 15 African FA presidents.

The FIFA Adjudicatory chamber, after the extensive hearing, ruled that the CAF President, had breached his duty of loyalty, offered gifts and other benefits, mismanaged funds and abused his position at CAF President, pursuant to the FIFA Code of Ethics.

The decision of the chamber is set to be made known to Mr. Ahmad in the next 60 days, per act 78 par 2 of the FIFA Code of Ethics.

Read the full statement below: 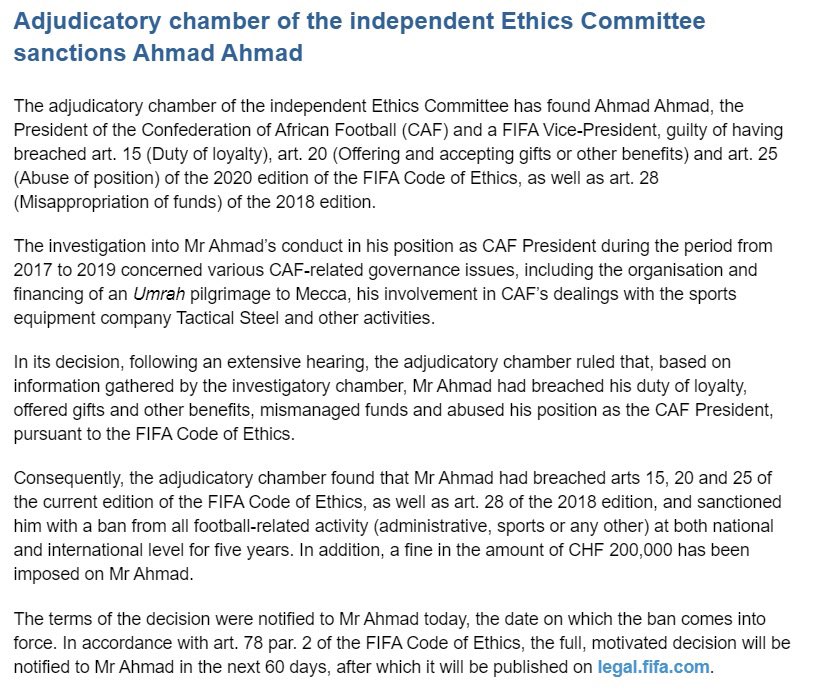 Football’s world governing body, in 2019, confirmed that its secretary general Fatma Samoura had been appointed ‘Fifa General Delegate for Africa’ in a bid to improve governance on the continent, after the Confederation of African Football had recently been under scrutiny on several issues relating to both governance and administration.

The Malagasy was set to seek re-election in next year’s CAF Presidential elections, but that bid now lies in tatters.

As it stands one of 4 men; Patrice Motsepe of South Africa, Jacques Anouma of Cote D’Ivoire, Augustin Senghor of Senegal and Ahmed Yahya of Mauritania, will be the next CAF President, when the elections take place in March 2020.

Police raid house and clinic of Maradona’s doctor on suspicion...

My presence will convince more veterans to return to the...

I have never turned down Parliament’s invitation – Jean...

The Chairperson of the Electoral Commission, Jean Mensa has debunked claims that...

Simple Ways to Look Younger, According to Doctors